Like they say, necessity is the mother of invention.  Opening a show door with wet hands when the handle is broken off can be a slippery challenge. It broke some time ago and I just put up with it.  As that percolated in my brain, I happened across a Marker Faire where a 3D printer head was zigzagging its way towards a finished part. Layer on layer of plastic being spit out in seemingly any shape or form.  Hmmm, that can’t be too hard to do! I could see it making my part. All I had to do was give it a 3D drawing of the part.  But wait, how am I going to do that? Heck, I did drafting on vellum with pencil, erasers and blueprint paper in high school. I guess it’s time for a little research with my good friend Google!

Working it backwards, I need a 3D printer, a 3D CAD file of the part, a CAD program, and dimensions of the part. Luckily there are some free 3D printers at maker sites near me. Both Cleveland Public Library TechCentral and the Case Western Reserve think[box] have 3D printers that only charge you for the material used. One down. What about CAD software? At this point, I’m in a learning experience so free is the key word here. After downloading two or three, I found FreeCad to be easiest to learn and operate. It still has its learning curve, but there’s a lot of info in their forums.

Next is the real part, designing the part, maybe with some help. My part was broken but why not use the 3D scanner and finish it off in a FreeCAD? That was a mistake. Here’s the part being scanned by a laser on the Makerbot Digitizer, and here’s what it looked like in 3D:

Darn, that’s not exactly the easiest thing to make whole again. I need to roll up the sleeves and carve this out of a solid block of computer bits. Looking over a few of the examples of how 3D CAD is done, I started to have flashbacks to high school math class. I realized that set theory and boolean operations were the key to how this all works. All that boring math stuff is actually letting me bore some bits here. A 3D CAD program is just emulating a Bridgeport mill with a whole bunch of digital tools to make virtual cuts in the digital model.

Starting with a rectangular box that matched the measured overall dimensions of the original part, I started by just subtracting a cylinder from it using a boolean intersection to get this:

A few more Boolean cuts for the screw hole and the addition (Boolean union) of a cylinder at the top to make a nice round handle completes the part. Freecad exports the part as the lingua franca of 3D, a STL file.

With the final part in my USB stick, I headed for the 3D printer, the Makerbot Replicator 2. Reading the on-line instructions is a must before you get there. Reading was easy, the tough part was turning the tiny thumbscrew to level the printing platform. With plastic filament loaded and the printer ready, you click ‘Print’ and watch the part grow up from the platform. In about 20 minutes the final part is done. Compared to the broken part the new one is nicer looking in white and probably has a better chance of not breaking. Best of all, I made it myself. 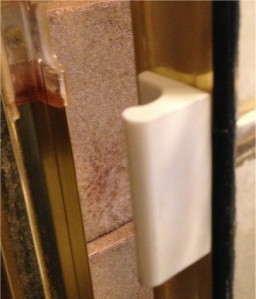